Jackson and Carter have been hanging out quite a bit lately. Thankfully Carter takes great naps on Brian and Kathy's bed...it's kind of nice he doesn't roll yet! And they are pretty much on the same schedule thanks to BabyWise so that has been nice too! Gives us moms more time to chat! :) Here are a couple pics of the little guys. They are just 5 weeks apart. 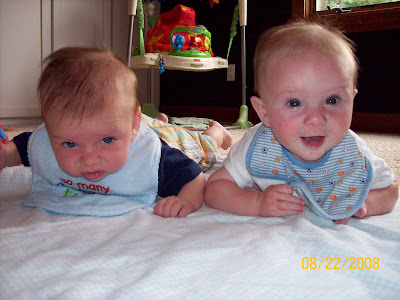 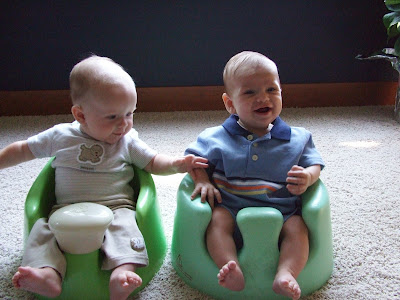 Not much else new and exciting...same old stuff!
Posted by Meeuwsens No comments:

Here are the other 3 pics that Carter sent to daddy this weekend to make sure he really missed him! He will be home this afternoon and we are both ready to see him! 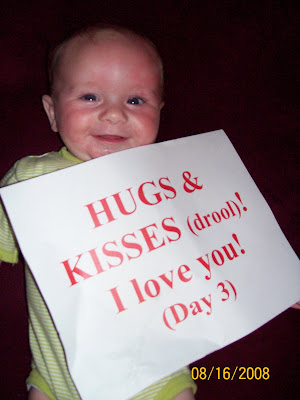 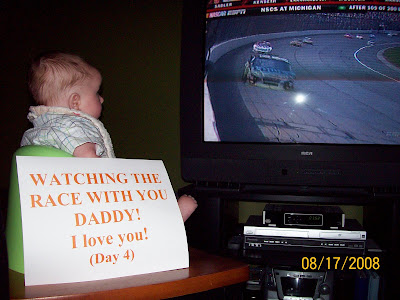 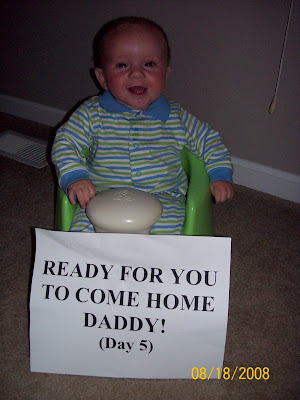 Today we had Carter's 4 month appt. He is right on track and a healthy little guy. And he did awesome with his shots this time; only a few seconds of crying and he was great all day. He weighed 14 lbs. 14 oz and was 26 1/4 inches long. So that put him in the 25th percentile for weight and the 75th percentile for his head and height....hmm...do we think he is taking after his long and lean dad? :)

Speaking of dad he is gone to MIS this weekend to the NASCAR race so Carter has been sending him daily messages. Here are the ones from the first two days. 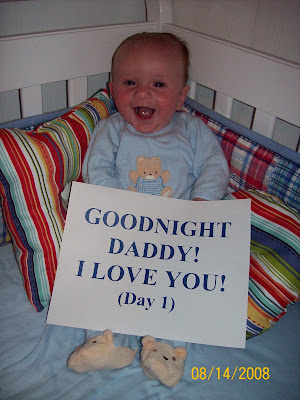 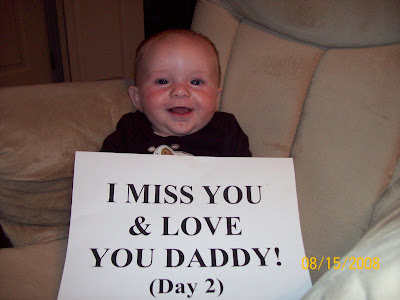 What I've been up to

Just thought I would let everyone know what I have been up to the last few weeks...

Mommy and Daddy and I went with DeWitts to Hanky Pank bay for the Coast Guard festival. Yep, I even got beads! Most people didn't know I was even there b/c I slept most of the time. 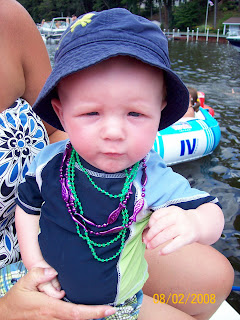 Daddy thought him and mommy should go on the carnivals version of the demon drop. Mommy isn't a fan of it but went anyway. I watched them go up, up and away and all of sudden they came down....fast! 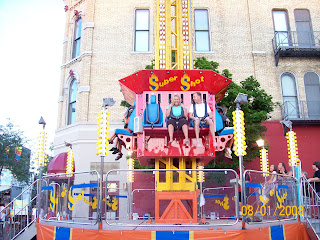 Last Friday Jenni, mommy and I went to see Kathy and Jackson. Mommy says Kathy and Brian's hearts are sad so please continue to pray for them. Jackson and I helped bring some smiles to their faces. 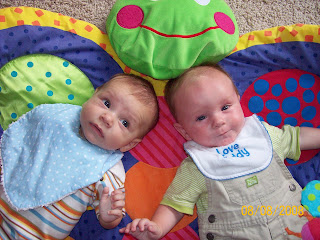 Saturday mommy and daddy left me with grandpa and grandma De Jonge while they went to Green Lake with all their friends. I was a BIG boy and had a lot of fun. 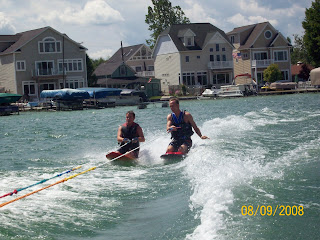 Then daddy told me a story of how tough he was on the big tube but.... 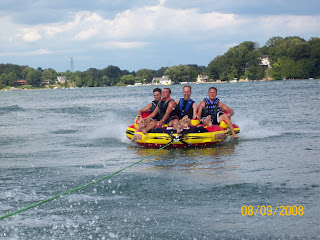 somebody gets hurt. Guess my daddy isn't quite as tough as he thinks. :) 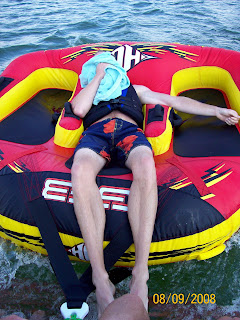 After Green Lake mommy and daddy went to Berlin to watch Uncle Ross race...he finished 2nd and is still first in points! Maybe once I get bigger they will take me to watch him.

On the developmental side of things I rolled from my tummy to my back last week and that was good enough to show mom I could do it b/c I haven't done it again. I also love my sleep like mom and dad and I sleep 12 hours a night. I love my exersaucer and bumbo chair...it goes everywhere with me! Friday I have my 4 month appt. so then mom and dad will be able to see how big I am getting! 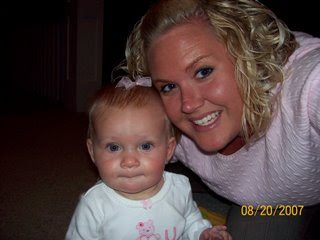 Today was a tough day but Grace's funeral was beautiful and a celebration of her life. It was perfect and we all were able to show our love and support to Brian and Kathy. Kathy said over 1,000 people came to the funeral home last night. Little Grace sure will be missed but they have so many wonderful memories of her and she will never be forgotten. Please continue to pray as the quiet times are the hardest. Thank you to everyone who has been there for them. They need it. I told Kathy she is going to get sick of me calling and coming over. I was able to spend the day with Brian and Kathy yesterday along with her parents and we shared many stories of Grace and memories. Don't stop sharing those memories with them. She will forever be held in our hearts. There was a nice article in the Lakeshore Press today. I copied it below.

Family holds to faith after drowning

FENNVILLE -- In the backyard of a lakefront cottage, Brian and Kathy Busscher panicked when they realized their 18-month-old daughter, Grace, was missing.

"A parent's worst fear became a reality," David Boeve, an uncle to the little girl, said Monday.
His niece drowned Friday at Fennville's Hutchins Lake. Rescuers worked to revive her, but she died about an hour later at Holland Hospital.

Now, her parents and other family members hold to their faith -- while remembering an adorable, loving little girl.

"She was a sweet girl, always happy," Boeve said. "She will be dearly missed by all of us."

Her death appeared to be a tragic accident, Allegan County sheriff's Detective Len Mathis said.
The family, including her infant brother, Jackson, were staying at Kathy Busscher's parents' home while the kids' grandparents were on vacation. Around 7 p.m., the parents realized Grace had wandered off. They ran to the lake.

"We've all been there," Mathis said. "A child wanders off. One parent thinks she is with the other parent. It's a tragedy. They are good parents."

Funeral services were set for today at Haven Christian Reformed Church in Zeeland. Family, friends and the church community offered prayers and support, said Sally Rietema, the church's administrative assistant. Grace will be missed by everyone, she said.She thought of the other children Grace had played with in the nursery, and said they will be sad.

"She was a sweet, lovable little girl," Rietema said.

The family lives in Drenthe, near Zeeland, and the couple come from close families.

The family's Internet blog shows pictures of Grace, born in January 2007, along with her brother, Jackson, who was born in May.

Most of the family photos on the Web site are of Grace enjoying time by a lake. One post says she loved going down a slide into the water "like a little bullet flying into the water and going under and coming up only to ask if she could go again."

A family portrait shows her on her mom's lap, dressed in pink with a matching bow in her hair. Others show her walking the beach with her dad, and picking her favorite vegetables in the backyard garden.

An aunt's blog showed the smiling girl, and a caption: "We have the promise that Grace is in Jesus' arms today."
Posted by Meeuwsens 5 comments:

Why does God allow pain?

That is a question that has been running through my head this weekend. Saturday morning Brian Busscher's mom called me to tell me that Brian and Kathy's little girl Grace drowned in Hutchins Lake. Why God? Why does he take such a precious girl from an amazing family? Brian and Kathy are perfect parents and had a perfect family. Only 7 months ago my best friend Jenni lost her baby girl Addison. Now I have to go through pain with my other best friend losing her 18 month child. I sat last night watching the musical fountain wondering how water can be so beautiful and how it can be so evil and take lives away. I talked to Kathy yesterday and we need to pray harder than we have ever prayed before. You always hear these stories but you never imagine they will happen to someone you know. In a split second God took that little girl to heaven with him. I bet she is singing songs and playing with Addison. But why? Why so young? It's not fair. We may never understand. Jackson will never get to play with his older sister. But we sure will tell him stories of how wonderful and perfect she was. I bet the angels in heaven are dancing with her and someday we will get to see her again. 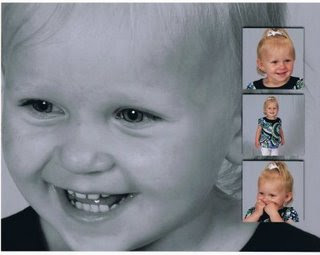 Please pray for the Frieling and Busscher families. This week and weeks to come are going to be so hard. We need to pray that God will wrap his arms around them tighter than he ever has. Pray that he will give them strength and comfort to make it through each day.
Posted by Meeuwsens 7 comments: