Brian can't seem to get a deer during hunting season but he sure does a good job when it isn't! This is #2 in 3 months. Thankfully he didn't hit it with the moped! Brian didn't feel like waiting around for the cops and by the time I went by in the afternoon someone cut the horns off...bummer! This guy jumped out of the deep ditch on 96th street and Brian never even seen it. His ole truck is built tough and is still kicking! 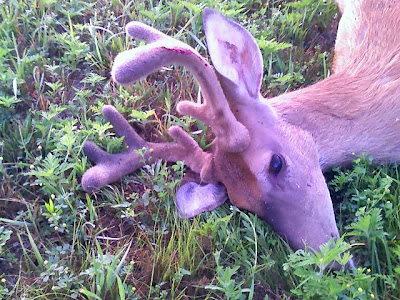 Last Sunday morning we saw two bucks in velvet in our backyard. It was really cool...one was a BIG one. Hopefully he sticks around until fall! Until then we will hope Brian quits hitting 'em!
Posted by Meeuwsens No comments:

Last night Brian started off the fair season by going to the Berlin fair to buy some animals to support his farmers. So me and my mom went downtown Holland to see the street performers. It was a great night and it was a lot of fun to watch them. Carter was dancing, giggling, and clapping for them...it was so cute. On the way to the car Carter HAD to play in the fountain. Him and grandma got pretty wet but it was well worth it to see how much fun he was having! 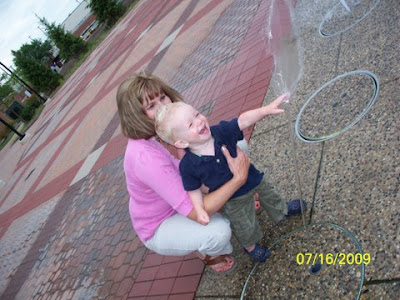 Posted by Meeuwsens No comments:

Another fun tradition each summer is to go to Big Star Lake with DeWitts. I went every summer as a child with Jenni so its always fun to go back. Carter loved being on the boat and watching daddy and Jason tube and surf. It was a beautiful weekend. Friday night we went for a nice cruise around the lake. 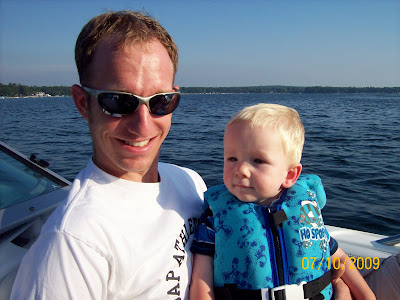 Saturday morning Brian took Carter and Jacob (and Quincy) out for a walk on the dock. 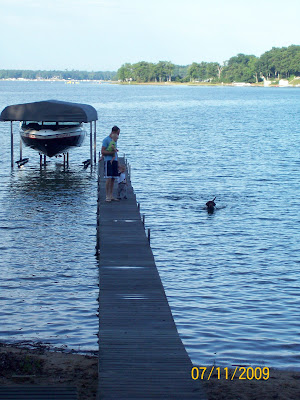 The dads and their boys hanging out on the dock. 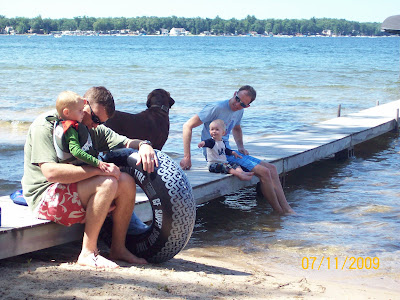 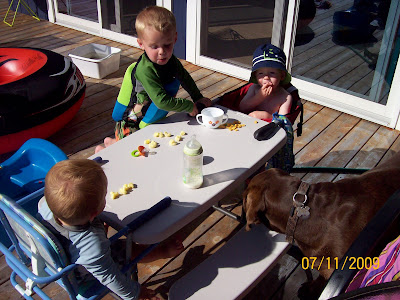 Saturday night we went to the lodge at Bitley to see the 'monster fish.' Carter and Jacob had a lot of fun feeding them. 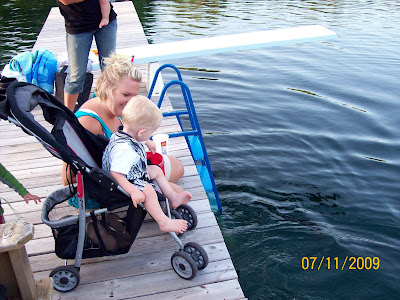 This is what we seen when we threw food in! They went CRAZY!!! 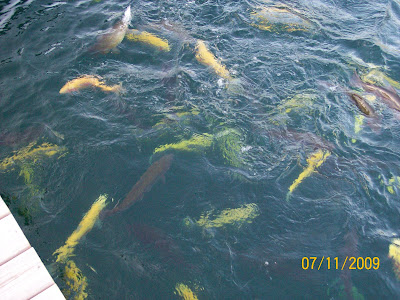 Here is scuba Steve (aka Jason) getting ready to scuba dive...it was a little dark but he was still able to see lots of fish. 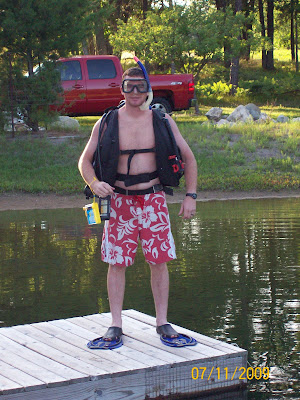 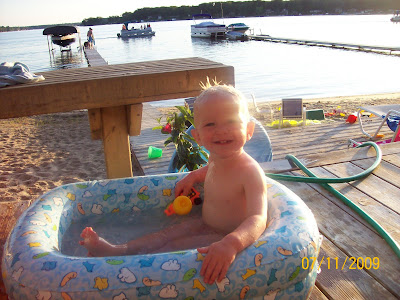 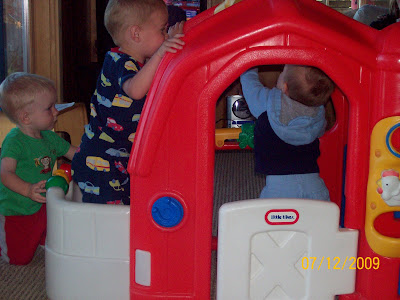 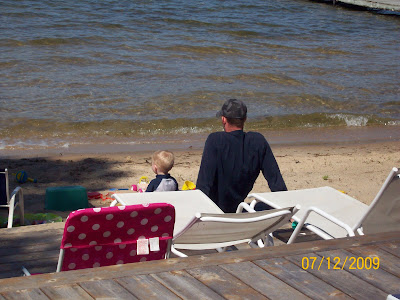 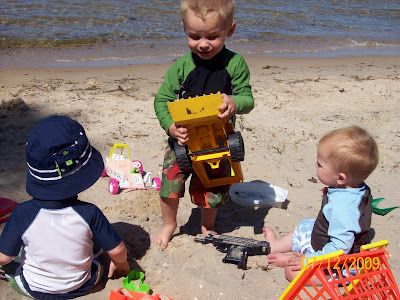 Deacon and Carter ready to go on the boat! 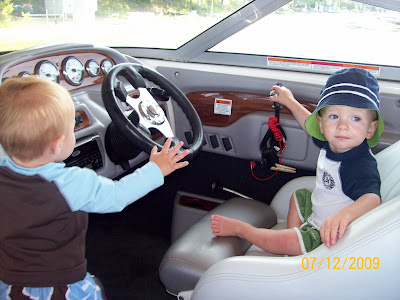 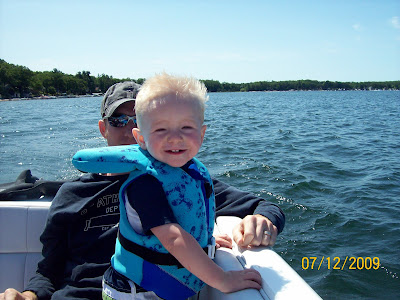 Here is what Brian and Jason mastered this weekend...surfing! It's kind of crazy but fun to watch. Jason has a video on their blog you can check out. 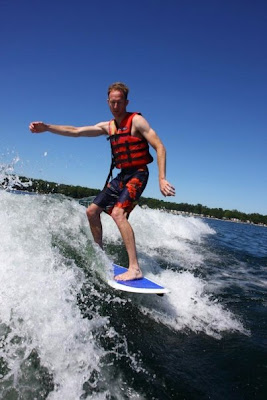 Testing the water in the pool. 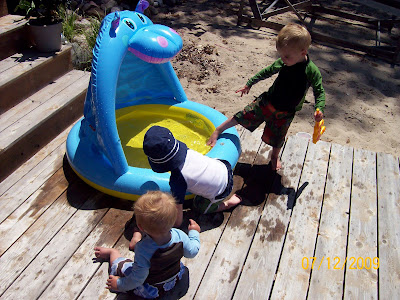 Overall we had a VERY FUN weekend. The boys (all 5 of them) :) kept us busy but they are sure a lot of fun and we made lots of memories!
Posted by Meeuwsens No comments:

Carter and I started off our weekend with a walk to the state park with Jen and Liam on Friday waiting for the sun to shine. Then it was off to mom and dad Meeuwsen's pool for the afternoon. The boys both napped the entire time and Jen and I got some time in the sun. Perfect! 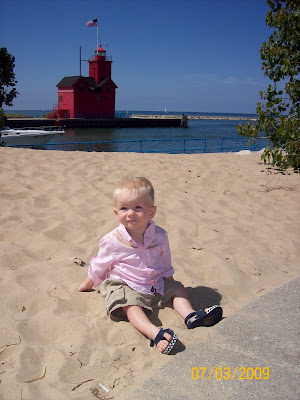 Friday night we went out with both of our parents on mom and dad Meeuwsen's boat to watch the fireworks. It was a beautiful night. Carter could sit on grandpa's lap the entire night and drive. He absolutely LOVES it. 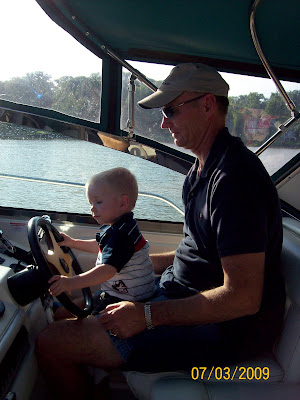 After some play time with grandpa DeJonge it was off to bed! He slept like a champ in his pack n' play down below. Never heard a peep! 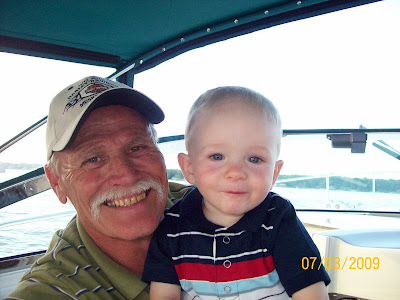 Saturday we spent the day at DeWitts house in Spring Lake. Here is Carter, Norah and Jacob in the play yard...worked good to keep them confined! Isn't Jacob a stud in his diaper and Safety Seal? He cracks me up! 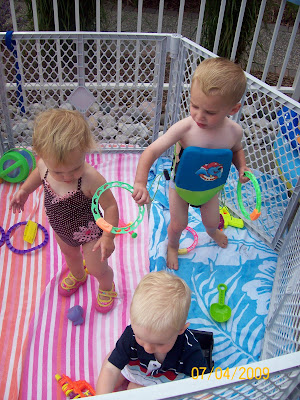 And here is one of the attempts at a picture of the five munchkins. Norah and Carter had their PJs on but oh well! From left to right: Jacob, Deacon, Liam, Norah and Carter. 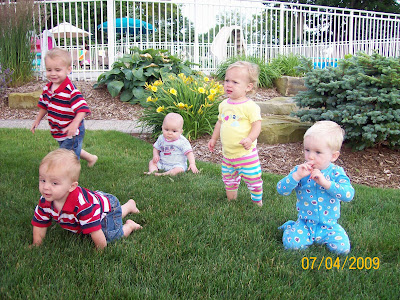 Sunday was back at mom and dad Meeuwsens pool for the day and of course a boat ride! Such a fun weekend!
Posted by Meeuwsens 1 comment:


Anyway, he had to get two shots which I was NOT expecting. Went okay though. Then when we were checking out the Dr. said he should get bloodwork done to check his CBC and LEAD levels so I thought while we are here we might as well go down to the hospital (connected to Zeeland Physicians) and get that done. The registration lady and lab girls were SO NICE but it was a disaster. They had to poke Carter's finger and fill in 2 circles with blood. Then the battle of getting a bandaid to stay on...oh what a mess...blood everywhere, BAWLING kid. We finally were able to get some gauze taped on. He cried in the car for about 15 minutes trying to get that stupid thing off while it is COVERED in blood...every inch of the gauze. We finally get home and he is okay. We take the gauze off and then listen to the answering machine....they FORGOT one of the tests! They didn't realize there were two pieces of paper and since they filled in 2 circles of blood I figured one was for the LEAD and the other for the CBC. So we have to go back....ugh, seriously??? I think that is an appt. for dad to handle...be good for him, right? Okay...sorry for that long story but I just had to share....so frustrating and not a fun afternoon. Carter spotted his bagel from breakfast and is now eating it...time for a nap though! 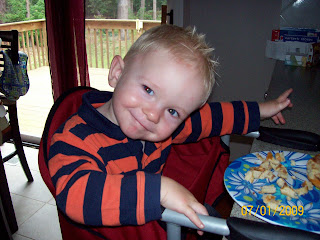