Now that we are getting settled in at home I thought I would share with everyone a few more pictures and how Carter James came into this world. As you can read in a previous post on Wednesday I was told I could no longer work. I thought I would be stuck home doing nothing for the next week but little did I know that I would go into labor the next day. On Thursday morning I woke up with some cramps, not sure if they were contractions so I tried to sleep them off. Next thing I knew my water broke. I called Brian and he headed home and then I called the doctor and they said to slowly head to the hospital. At that point my contractions were pretty far apart. We got to the hospital at 11:30 a.m. and I was dialated to a 4 and the contractions were about 5-6 minutes apart. I wanted to hold off as long as I could without an epidural so things wouldn't slow down and I made it to 4:30 p.m. and couldn't bear the pains anymore. At that point I was dialated to a 7. (Brian will tell you I was a different person after getting the epidural! :)) Things started to slow down so around 8 or 9 they gave me some pitocin to get things going again. At 10:45 p.m. I was fully dialated and ready to push. Carter was a stubborn little guy and didn't want to come out. He was also posterior and apparentely wanted to face up and see the world. The doctor tried to turn him but didn't have any luck so it was quite painful. The doctor and nurse wanted me to feel the contractions so I think I felt everything by the end! After two hours of pushing and the doctor using the vacuum to get Carter out he finally came! Because he was stuck for so long he came out limp and really scared us. They had to give him some oxygen to get him going and after a couple of minutes of praying we heard some wimpers and knew he was okay. We think he is perfect and such a good little guy. On Sunday he was a little jaundice and was down to 6 lbs. 9 oz. so we had to supplement with some formula. We went to the pediatrician yesterday and he is doing great and gaining weight. He was such a good little guy. Alrighty....enough jabbering...here are some more pictures. 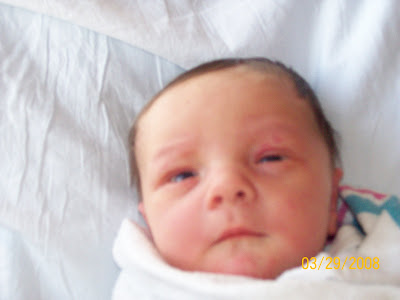 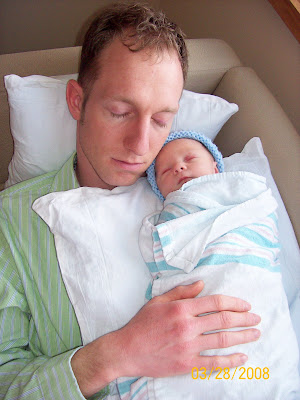 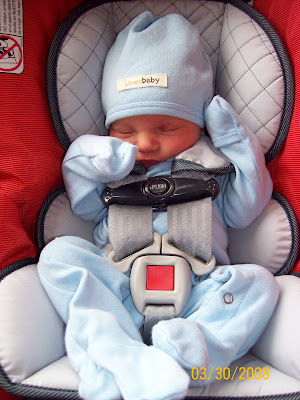 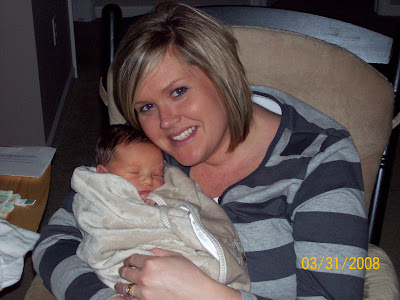 Fresh and clean after his first bath 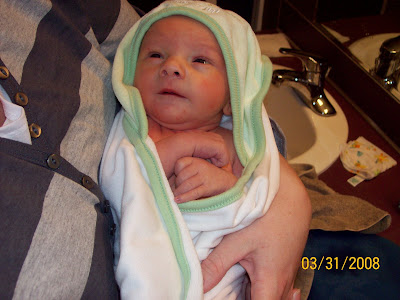 Kelly and Brian, How amazing! Sounds like it was pretty painful but I'm sure all worth it now that you have seen his face. Glad you are all settled. He is beautiful. He has so much dark hair, I love it. You guys look amazing!

Congrats!! So glad things went alright. I talked with Nicki N. Sunday and she said you guys had him!! How exciting! He is a cutie! Enjoy every minute!

Congrats! He is so cute!! I hope everything is going well at home!

He's so precious! So adorable! And you look great Kelly! We're thinking about you guys alot and hope everything's going well at home! Enjoy every minute... he'll be walking before you know it :)