The Latest and Greatest


Once again I am behind so here is what we have been up to the past few weeks. As tradition goes we went to the Ottawa County Fair. I grew up going every year...riding the rides, eating the junk food, checking out the animals, etc. So the night that Brian was there buying animals at the auction for ZFS, me and my mom took the boys.

First we hit up the animal barns. The boys wanted to touch them all! 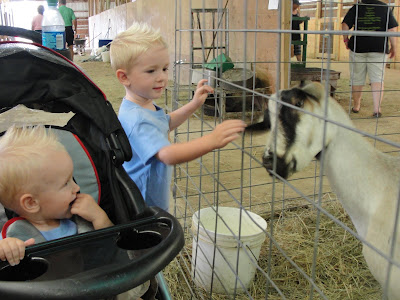 Checking out the ducks outside with Grandma Mary Ann. 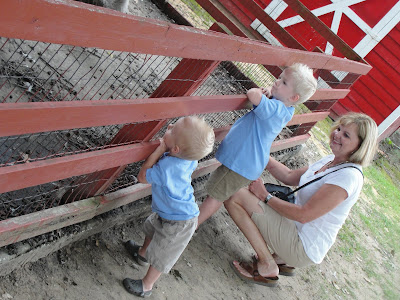 Petting the bunnies with mommy. 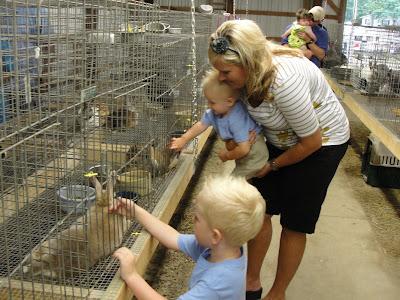 And riding the rides! Carter LOVED them as usual. Check out that face. :) We finished the night with all kinds of junk food and met up with daddy and Grandpa Jim. 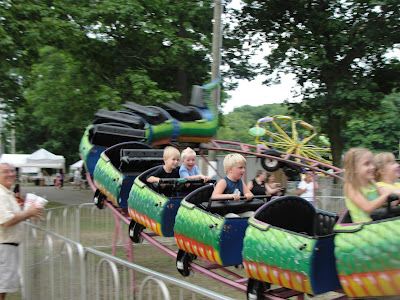 The following weekend we attended Travis and Sandra's wedding. Travis is a long time friend of Brian's and works at ZFS with him. He also happens to be my 2nd cousin. :) 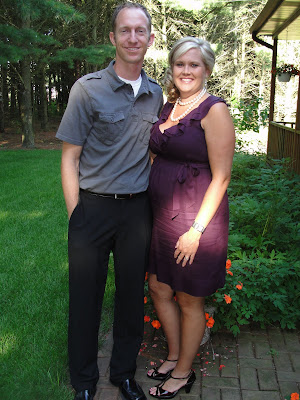 The beautiful bride and handsome groom! 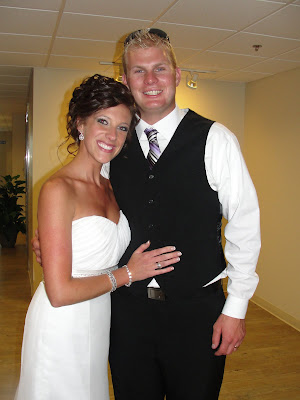 The next morning we headed up to my Aunt Pam's cottage. Soon enough the neighbor boy came over to play with Carter. 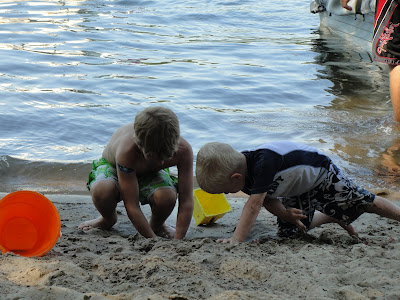 Muddy mess but oh so happy! 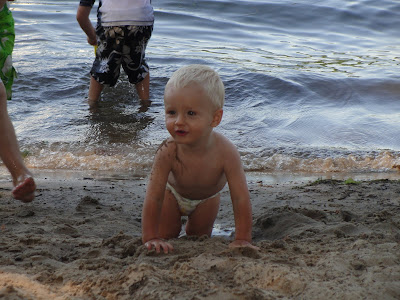 The boys had so much fun netting fish from the dock. They would throw bread in and scoop them up and then put them in their buckets for a bit to watch them. 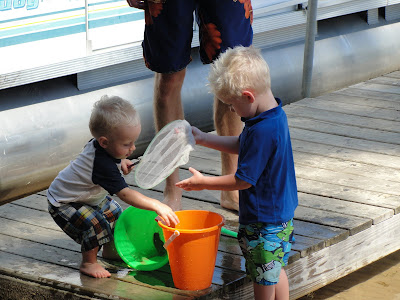 My cousin Matt and Brian got some knee boarding in. We had a great time but it was hard without my Uncle Ken there. We definitely missed him but it was so nice that my cousins could come join us and Aunt Pam took care of us as she always does! 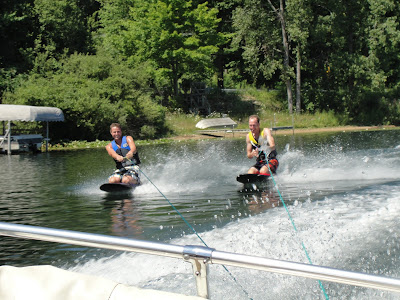 Then last weekend it was off to Coast Guard Festival in Grand Haven with Grandpa Cliff and Grandma Karen. I forgot I had my camera with so I didn't take pictures of Carter on the rides but he had fun once again. Then we went for a walk and seen this copper guy. Carter was too scared to stand next to him. 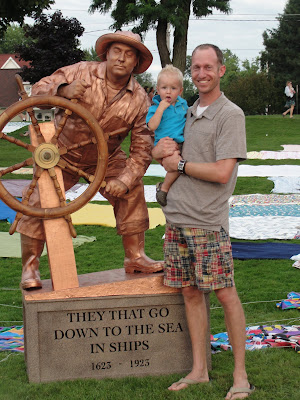 Can't pass up ice cream after our long walk! We didn't stay on the boat Friday night which was a good thing since it rained all day Saturday but after naps on Saturday we headed there to play on the beach and swim for a bit and then hung on the boat and woke up Carter to watch the fireworks which he loved and chatted about them the whole time. We headed home Sunday morning. 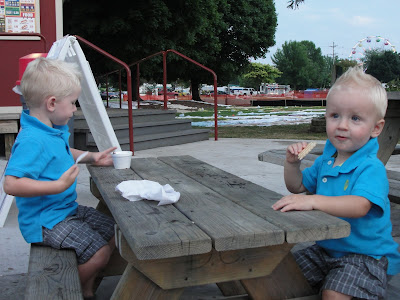 Then Sunday afternoon it was off to mom and dad Meeuwsen's since Eric and Kate and the girls were home from Nebraska. Carter and Brian had gone up to their cabin during the week to hang out with them so he got some time with the girls. We had a fun afternoon of swimming. 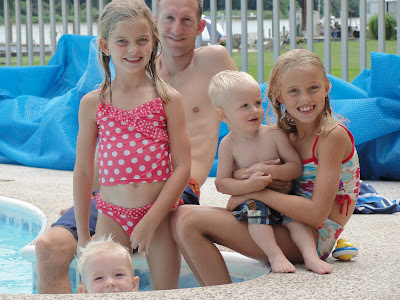 Last Monday we got to have Norah and Ethan over for the day. They are about exactly the same ages as our kiddos. It sure was a BUSY day but the kids had so much fun playing together and I even got them all to nap at the same time. :) 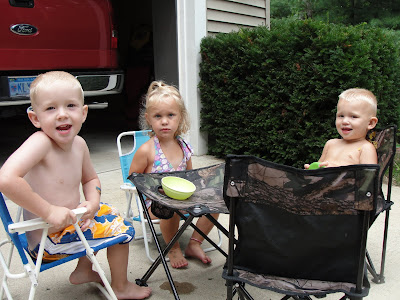 And last week Carter and Norah went to VBS at Faith United Ref. Church out by our house. It was nice b/c it was a small group and they had so much fun. Thursday night we got to go watch them do a little program. It was so sweet when we sat down and Trey got off my lap and headed up to the front to sit next to his brother....he wasn't going to miss out. 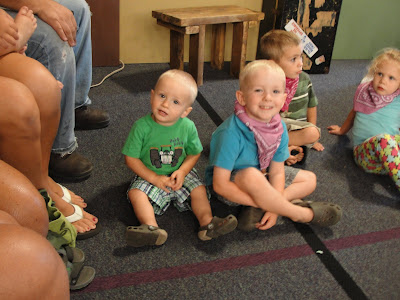 Friday Carter took his first trip to the dentist and although he wasn't too sure of it at first he did great and really liked it in the end and is excited to go back again! 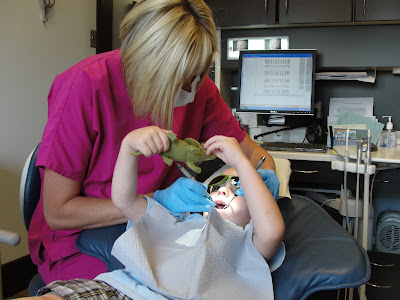 Saturday after the rain quit we went out to Drenthe to Breakfast on the Farm at Daybreak Dairy. They have 7 of these events throughout the state. ZFS was a sponsor. First we had a wonderful breakfast and then they give you a tour of the farm. It was so well organized as they probably had 1,500+ people attend.

The first stop was checking out these calves and how they are given what nutrients they need. Everyone had to wear these booties to not spread disease. 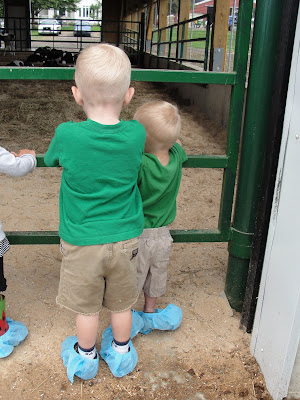 After we seen the cows being milked Carter got to try his hand at it. 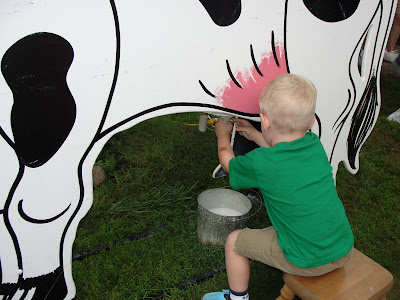 Have to get a picture next to a tractor! 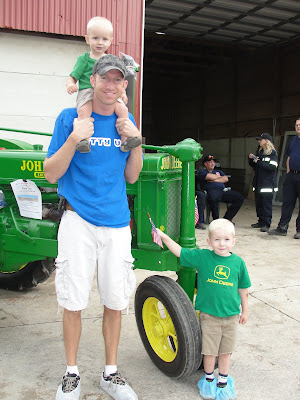 Petting the BIG cows with mom. 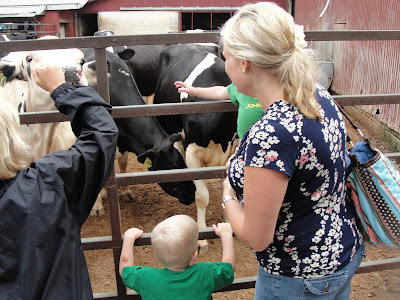 They picked us up with hay wagons and brought us back out to our truck when we were done. We were there for 2 hours and the boys did great. Carter told me his legs were tired when he was done. :) 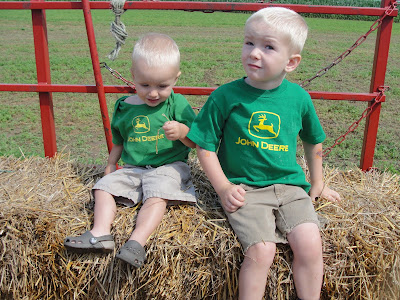 Phew....as much as I don't wish summer away I have to admit it was so nice this past weekend to not have to pack and unpack since we stayed home. Now the nesting phase has begun and I am trying to get our house cleaned and in order...it's been neglected!