This weekend we did a lot of birthday celebrating. Friday night we went to Chuck E. Cheese since Kylie will turn 3 this Friday. The girls had a lot of fun playing the games and watching Chuck E.

As you can see Karinda is the photogenic one....Kylie, not so much. :o) 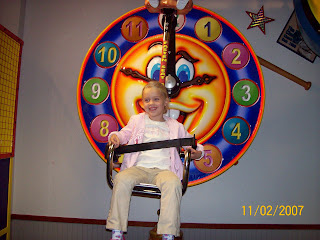 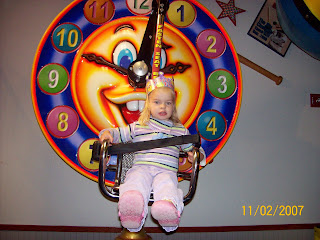 Saturday night we stuck with tradition and took just Kylie out for her b-day for a special night with Uncle Brian and Auntie Kelly. We first went to Red Robin for dinner and of course Brian had to play a 50 cent game and he won a stuffed animal on his first try! It was the monkey from Aladdin. He tried to convince Kylie that was good enough and we didn't need to go to Build a Bear...no fooling her! So off we went to the mall and first road the Carousel and then went to Build a Bear. 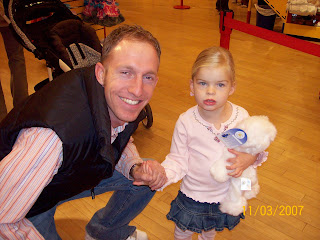 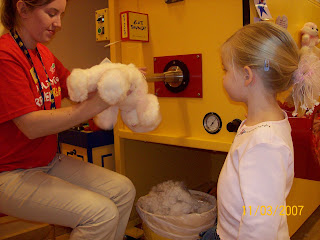 Sunday we had a nice relaxing day and then we decided to go check out the Todd Farms in Fennville to look for deer. There was still quite a bit of corn up but we are able to see some nice bucks. Then it was off to Crane's for dinner! Our desserts were to die for!
Last night we had the privilege of going to the Young Life dinner with Jason and Martha. It was a fun night out with friends and they had a great program as well. Thanks guys for inviting us!
Posted by Meeuwsens