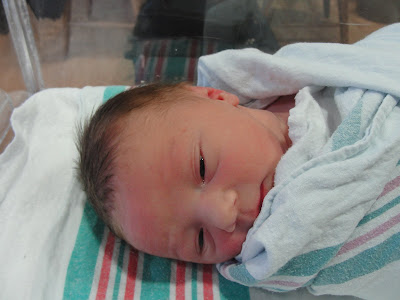 Her big brothers were excited to come see her. The first night with all the visitors I don't think it all quite clicked with them but the second night they came they were really into her. Carter was full of questions and Trey loves to give her kisses. They were so sweet to her. 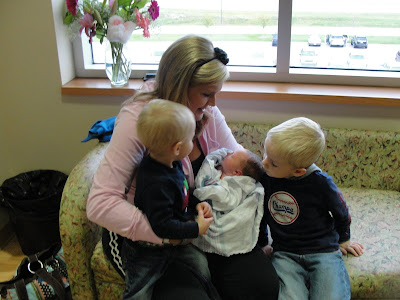 Yes, she looks a lot like big brother Carter as a newborn. Those Meeuwsen genes are strong! 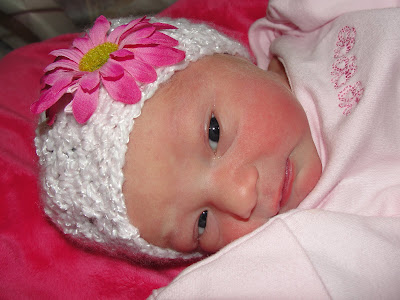 Napping with dad. I have a pic just like this with Brian with each of the kids. So in love with his little girl. 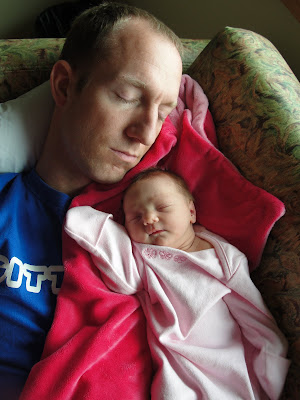 Jade is named after my Grandma Boers (my mom's mom). Her first name was Evelyn and although she passed away when I was 9 I have a lot of special memories of her growing up. This was also the name we would have used if Trey were a girl. 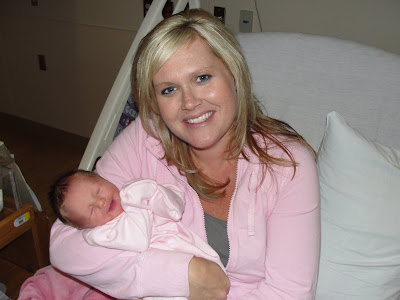 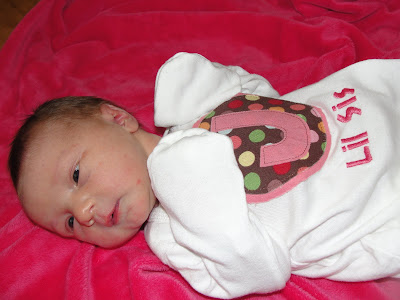 Family of five picture! Since Jade thought she would come 3 weeks early I had just ordered the big brother, little sister shirts, so unfortunately they will be in next week so we'll save them for the next photo! The outfit above was made by my BFF Jen for when Trey was born (which he obviously would have worn if he was a girl). 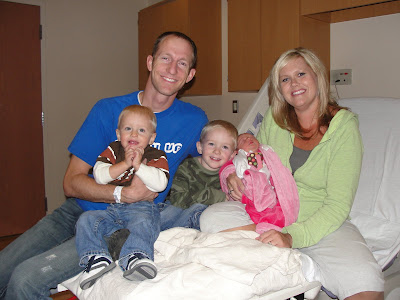 Checking out their new little sister and figuring it all out. :) 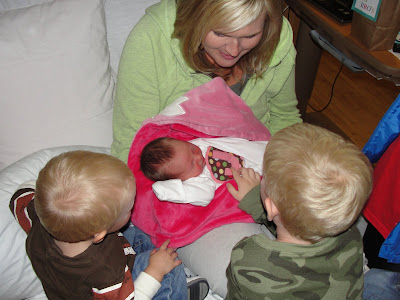 Birth Story (for those interested and for my own account!):
Around 9:00 pm Thursday night I kept having to go the bathroom and Brian and I were joking that maybe I was in labor and that we both weren't ready yet. Brian headed to bed early and I stayed up watching TV as I started to have some pains around 10 pm but of course thought it was all in my head. I fell asleep on the couch from about 10 to 11 and then woke up to pretty regular contractions and I was pretty sure my water had indeed broke. For the next few hours I tried to sleep but no such luck as the contractions were pretty steady. About 2:30 am I woke up Brian and told him this baby was coming and we needed to start packing. I wasn't due until October 15 so I had nothing packed so it was kind of hectic this time! After getting packed and showered I called the Dr. and of course he was surprised to hear from me b/c when I was in on Tuesday and he checked me absolutely nothing was happening, I was still measuring small, etc., so we figured she would come close to my due date. He told me since my water broke I could head in when I felt ready. So I called my mom, she came around 4:30 am, and we were off. We stopped at ZFS for Brian to tie up some loose ends and were at the hospital at 5:00 am. The nurse said I was at 3 cms, about 75% thinned and confirmed my water broke so they were keeping me. :) Dr. Geerlings came in around 8:30 and checked me and I was at about 4 cms so he said to start me on pitocin. There were 2 other girls delivering so it took a bit to get all the IVs and everything going but once the pitocin started contractions got pretty intense so then the epidural came. Dr. G. called to see how I was doing and the nurse said I was at around 6 cm dialated. Within 5 minutes I had the urge to push, she checked me again and I was fully dialated and ready to deliver! So a quick call to the Dr. and he was here within 10 minutes and Jade was born after 3 contractions! It all went really quick but I was so relieved she was here and healthy! God once again blessed us beyond what we could imagine. True to a girls nature she loves to be held and so far is doing great. I am so in love once again with that newborn smell and softness of her skin and could hold her all day! It was fun to call our family and friends as they were all quite shocked to hear that she was here already! Praying for a smooth transition as we begin our new adventure as a family of five!
Posted by Meeuwsens

YIPPEE!! So happy and excited for you guys, love her to pieces! Love her cute shirt too...so fun!!

I frigging lovE birth stories! This made me sO happy to read and even more excited for our number three! Cane is perfect. Soak it all up!

Congrats Kelly (and family)! Hope you all adjust well!

Congrats Kelly (and family)! Hope you all are adjusting well and can get some rest. :)