Since Brian and I want to have four kids I thought I would try my hand at it last night. The neighbor girls followed me up the driveway when I got home b/c they wanted me to take them to the park (Ottawa Area Center). So after dinner and three visits from them later I decided I better go! So I loaded up Carter in the stroller and the girls rode their bikes. They played at the park while I walked. They were big listeners so I told them I would take them to the Soft Spot. So we loaded them up in the Yukon and went for ice cream. It was a lot of fun! And for those of you that read this entire post...NO, Brian and I are NOT going to have 4 kids...ha,ha! :) 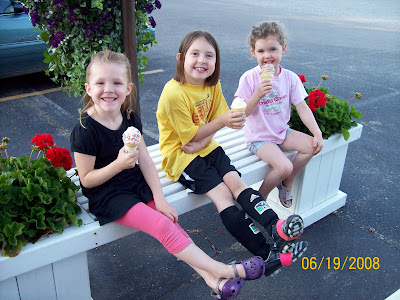